From the nation’s leading law firm representing victims of Campylobacter and other foodborne illness outbreaks.

What is Guillain-Barré syndrome?

Guillain-Barré syndrome is a disorder in which the body’s immune response, typically to an infection, causes nerve damage. The syndrome is rare, affecting about one to two people in 100,000 each year. It can present as a very mild case of brief weakness to devastating paralysis, affecting the muscles that allow a person to breathe on their own. Fortunately, most people eventually recover from even the most severe cases of Guillain-Barré, although some are left with some level of weakness. 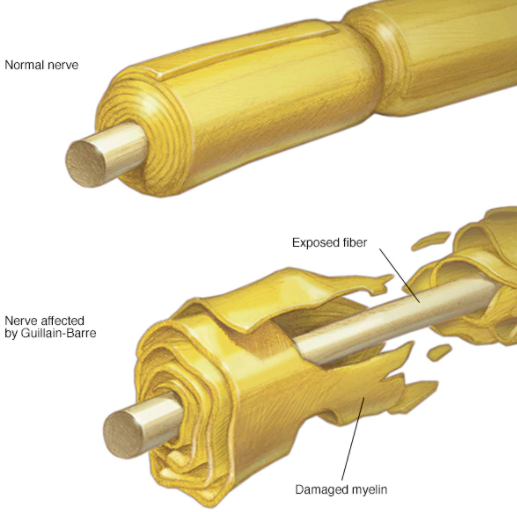 The demyelinating form of Guillain-Barre syndrome destroys the protective covering of the peripheral nerves (myelin sheath), preventing the nerves from transmitting signals to the brain. https://www.mayoclinic.org/diseases-conditions/guillain-barre-syndrome/symptoms-causes/syc-20362793.

Guillain-Barré syndrome can occur in children, but the number of people who develop the syndrome increases as people get older. Men and women are equally prone to the disorder.

The exact cause of Guillain-Barré syndrome is unknown. Researchers do not know why it strikes some people and not others. It is not contagious or inherited, despite the fact that it can be triggered by an infection.

Guillain-Barré syndrome often occurs a few days or weeks after a respiratory or gastrointestinal infection. The most common preceding infection involves the bacterium Campylobacter jejuni, a common foodborne pathogen that can lead to infectious diarrhea. Less common triggers include cytomegalovirus, Epstein-Barr virus, HIV, and Zika virus. The newest infection to add to the list is SARS-CoV-2, the virus that causes COVID-19. Rarely, Guillain-Barré syndrome develops after surgery, trauma, bone marrow transplantation, or vaccination.

Do outbreaks of Guillain-Barré occur?

If you have questions about foodborne illness, your rights or the legal process, we’d be happy to answer them for you.